Why Do My Parts “Wear Out”? How Can I Help My Equipment and Parts Last Longer? 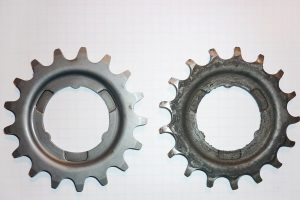 Wear is a universal constant in manufacturing, and is among the most common causes for failure and material replacement.

The following are some types of wear and they will all requires specific solutions and materials to having them last longer. It is important that no single criterion be used to judge the suitability of an alloy for a given application. For instance, good anti-galling properties may be ineffective if the alloy surface is destroyed by corrosion, or its dimensional stability is affected by improper practices during the manufacture of the component. All criteria, therefore, should be taken into account and evaluated for each intended application.

Adhesive wear occurs when two metallic surfaces with inadequate lubrication are in contact and experience relative motion, especially under a cyclical load. As the surfaces contact each other, the local pressure causes them to fuse together so that small particles of one material adhere to the other. Repeated action of this metal transfer leads to deterioration of the surface, and formation of wear debris. Adhesive wear is a function of the compatibility of the metals that are in contact with each other. Components of an identical, or very similar, material are more likely to stick together. Materials that dissolve in one another or will form an alloy under the operating conditions are more likely to exhibit adhesive wear. The compatibility of materials is well understood and should be considered in design decisions.

Abrasive wear occurs when hard particles or protuberances on one surface are forced against and move along a second surface. This may be the desired state (think sandpaper, or filing), but may also produce an undesirable condition where components must be replaced prematurely, or filtration must be added to remove contaminants from the system. If the particles are also allowed to move or roll, a rolling or three-body abrasion can also occur.

Erosion occurs when particles suspended in gases or fluids strike a solid surface. The original material is progressively lost due to this interaction. This type of wear is particularly noticeable in applications like valve trim characterized by high flow where there are contaminants present. The compounded effect of many small impacts can be considerable, and that effect is exacerbated if the particles have sharp edges.

Corrosive wear happens when chemical or electrochemical corrosion assists frictional, abrasive, or deformation wear. This occurs, for example, in equipment that transfers slurries during coal and ore processing.

So named because of the bubbles or “cavities” that are produced, cavitation damage is caused by the formation and collapse of vapor bubbles in a liquid near a metal surface. This type of damage often occurs in high speed applications like hydraulic systems, pump impellers and trailing faces of propellers. In these environments, high velocity liquid flow and changes in pressure are encountered, and vapor bubbles can form and collapse rapidly. Calculations have shown that rapidly collapsing vapor bubbles produce shock waves with pressures in excess of 60,000 pound per square inch, more than enough to damage the surface of a component using most alloys. Many studies on cavitation and erosion have been conducted and the relative resistance of commonly used alloys is widely understood.

Fretting wear is a result of small amplitude oscillatory motion; or more simply, vibration. This is a surface-to-surface form of wear where lubrication may be squeezed out under load with the result being metal-to-metal contact. It can also occur in joints or couplings that are bolted together and not intended to move. Nearly all machines vibrate, so this is a common form of wear-based failure due to fatigue in high stressed components like shafts.

Another significant form of metal to metal adhesion wear is galling. In galling, material from one surface of a component, moving upon another opposing surface under load, fuses to the other surface and tears metal from the second surface. Galling must be taken into consideration in bearing, bushing, seal ring, and wear ring components or wherever two metals are sliding against each other. Where galling is a significant issue, the application of copper based alloys is preferred due to their lower tendency toward galling. A note of caution. Sometimes a surface oxide film is necessary and added for protection against corrosion. If this protective oxide layer is destroyed by poor anti-galling or erosion conditions, the hoped for corrosion resistance is lost.

Deformation wear, or spalling, is the mechanism where the wear surface experiences enough deformation from repeated contacts that it suffers minute fractures and expels particles of wear debris from the surface. As these grow, they may appear on the surface of the metal as large pits.

Surface fatigue wear is the result of cracks and flaking that have been triggered by repeated alternating stress cycles like rolling. For example, rail or wheel systems may exhibit this type of wear. Micro-cracks develop, which may be either on the surface or sub-surface. Eventually, parts may fail due to repeated tensile and shear stresses.

Palmer Can Help You With Hard Facing and Thermal Spray

Are you tired of continuously replacing your process components time and time again? Do you find yourself “caught between a rock and a hard place” of juggling your short-term budget limitations vs maintaining your equipment with a long-term “cost of ownership” approach? Do yourself a favor – don’t replace your high-wear components before FIRST speaking with Palmer Tool about the potential benefits of HVOF or PTA to EXTEND the service life of your equipment.
> LEARN MORE

Palmer Tool completes critical jobs on-time and on-budget. Since 1966, Palmer has taken on jobs that other shops and contractors either didn’t want, or just couldn’t do. We can fabricate parts in our shops, visit you at your plant, or meet you at on-location (ie. logging, mining, construction, etc.). From the toughest repairs to the most complex new assembly, we’ve seen and done it all. Over the past 50+ years, Palmer has maintained our reputation as a trusted expert welder and fabricator of non-ferrous alloys in demanding applications (high pressure + high temperature chemical plants). Our hard-facing applications, and robust designs, have successfully extended the service life of countless industrial “extreme service” components, saving our clients money! Palmer Tool and Contractors provide on-call emergency services 24/7, because we understand that in manufacturing “the clock never stops”.